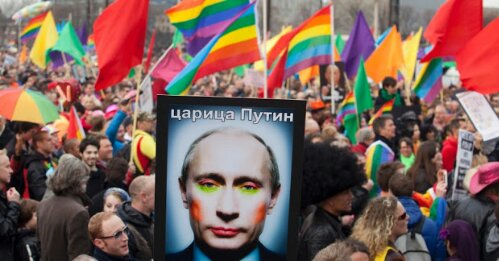 Argentina’s National Commission for Refugees (CONARE) decided to grant refugee status to a young gay man from Russia who was forced to leave his country due to anti-LGBT violence and discrimination. The man submitted his request last year. In its report, the commission recognizes the violence and harassment the young man suffered, the dire situation the LGBT community faces in Russia, and the lack of protection by the Russian government.

The Argentine Federation of Lesbians, Gays, Bisexuals, and Transsexuals (FALGBT) welcomes the recent decision of CONARE to accept the refugee-status application of a 28-year-old gay man, who for the sake of privacy we will call Gene. Gene had decided to leave his country because of the constant harassment, violence, and discrimination he endured, and turned to FALGBT for assistance with his migratory status. After reviewing his case, CONARE decided to grant him “refugee status” under the terms of National Law 26.165 and the UN Convention relating to the Status of Refugees.

It must be emphasized that Argentina has paved the way for recognizing discrimination motivated by sexual-orientation or gender-identity bias among the eligibility criteria for refugee status, in line with the recommendations of the UN High Commissioner for Refugees. As a matter of fact, the report of the CONARE Executive Secretariat makes clear that Gene’s reasons for leaving his country were the violence, discrimination, and insecurity he endured because of his sexual orientation.

The report additionally highlights key points explaining its decision: the fact that in Russia there is widespread violence against LGBT people—which has been documented by UN agencies and by various international LGBT and human rights groups—and particularly the fact that the security forces drive, or at least tolerate, this violence. In this regard, it should be pointed out that Gene and others seeking asylum in Argentina stress that the police are not registering complaints of violence or threats against LGBT people, nor do they provide them with any form of protection.

On top of this, the law banning “propaganda on nontraditional sexual relationships,” passed last year by the Russian Parliament, as well as other legislative initiatives, not only pose a real risk of state persecution of LGBT people, but also have noticeably increased the threat of violence and stigma within the discourse of public officials and journalists. All of these issues were factored into the CONARE Executive Secretariat’s report and led to its decision to grant refugee status to Gene.

“It is a great joy and relief to know that Argentina, consistent with its policy to promote LGBT rights at home and in the international arena, has decided to grant refugee status to Gene, which will allow him to continue living in a country he chose precisely because its society widely accepts diversity and because, even when certain sectors continue to discriminate and promote hate, the state stands ready to protect and defend their equal enjoyment of rights,” FALGBT President Esteban Paulón stated.

“Gene is very happy and relieved with the decision, and he plans to apply for Argentine citizenship after the two-year residency term established by the constitution is met. The difference between living in a society that persecutes the sexually diverse, wherein the state is complicit, and living in a country that is increasingly more egalitarian with a government that protects the rights of all, is a critical factor at the life-planning stage. While we work to end violence and discrimination around the world, it is important that we provide everyone with the opportunity to enjoy their human rights today in our country, and that we be open to those who suffer discrimination because of their sexual orientation or gender identity,” he added.

“On behalf of FALGBT, we wish to acknowledge the work of CONARE, and hope that this important precedent allows us to promptly resolve cases of other LGBT people from Russia who await recognition of their refugee status. Just over a year ago, we met with CONARE officials to make them aware of what was happening in Russia and other countries, so we are happy that Argentina has applied the norms of international law broadly and favorably toward the defense of human rights for all. We will continue working in this direction to provide protection to those who seek it and to promote equality around the world,” he concluded.