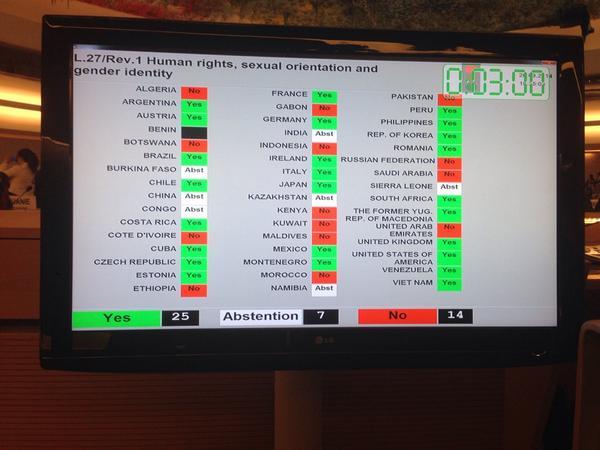 The United Nations Human Rights Council today passed—with 25 votes in favor, 14 against, and 7 in abstention—a landmark resolution on violence and discrimination on the basis of sexual orientation or gender identity. In spite of certain differences during debate, Latin America exhibited a unified stance in favor of equality at the final vote.

Last week, during its twenty-seventh regular session, the United Nations Human Rights Council, based in Geneva, adopted a landmark resolution on violence and discrimination towards LGBTI people. The bill, introduced by Chile and Brazil, was cosponsored by several countries in the region—including Argentina—and other parts of the world. Apart from being a valuable recognition of the human rights of LGBTI people, the resolution requests that the High Commissioner for Human Rights update the report on the matter submitted by then–High Commissioner Navi Pillay in 2012.

Many countries (mainly African and Arab) had proposed amendments that completely distorted the resolution and deleted references to sexual orientation, and at the same time refused to acknowledge the report submitted in 2012 by the Office of the High Commissioner, which clearly indicated a serious deterioration in protection from discrimination and violence on the grounds of sexual orientation and gender identity. All the amendments were rejected, primarily with votes from European and Latin American countries, as well as South Africa, Japan, and South Korea. It is worrying that at a certain important time Venezuela and Cuba had chosen to step aside and not stand up against the proposals that were so clearly an infringement of the collective human rights of LGBTI people in a number of Arab and African countries.

Nevertheless, once it was confirmed that the text would be voted on as it was originally proposed by the sponsors of the resolution, Venezuela and Cuba went along with the rest of the region and voted in favor, along with Argentina, Brazil, Chile, Costa Rica, Mexico, and Peru.

Furthermore, in its operative part, the resolution “takes note with appreciation of the report of the United Nations High Commissioner for Human Rights on ‘Discriminatory laws and practices and acts of violence against individuals based on their sexual orientation and gender identity’ of 17 November 2011, and the panel discussion held in the nineteenth session of the Human Rights Council.”

Even more importantly, the resolution “requests the United Nations High Commissioner for Human Rights to update the Report A/HRC/19/41 with a view to share good practices and ways to overcome violence and discrimination, in application of existing international human rights law and standards, to present it at the twenty-ninth session of the Human Rights Council.”

Esteban Paulón, President of FALGBT, stated: “We welcome another major milestone for international LGBTI activists and their allies, as this type of resolution proves that there is no turning back on the road to recognizing and expanding the rights of our community in the world. Nevertheless, the fact that countries such as China and Russia refuse to acknowledge violence and discrimination motivated by sexual-orientation and gender-identity bias warns us that we must not give up but rather work even harder in our own countries and on a global level.”

Alejando Nasif Salum, Secretary of International Relations at FALGBT, added: “The almost unified stance of Latin America proves to us that the Latin American LGBTI movement is getting stronger by the day and that we must work together in order to achieve real and legal equality across the region. The half-hearted stance of Venezuela and Cuba is a wake-up call, and it shows that there is still more advocacy work to be done. We call on allied [gay-friendly] governments like Argentina to discuss these issues in order to attain higher levels of regional consensus in favor of equality.”

To conclude, Paulón stated: “Once again we recognize the work of our country in international forums, as well as that of other countries in the region. We welcome the favorable position of Peru—a country that up until a few years ago was reluctant to support such resolutions—which has now joined us, as well as the leadership of Chile. However, we also understand that this means that governments in the region must commit themselves more decisively in the struggle against violence and discrimination towards the LGBTI community, through public policies and through legal recognition of equality for each and every individual. In this vein, we will continue working together with our sister organizations in Latin America.”