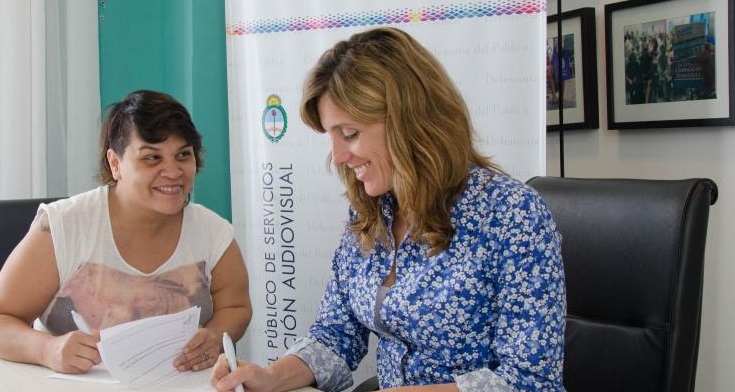 Together, the agency and FALGBT will organize trainings on the topic of gender, set up interdisciplinary working groups, and provide awards for good practices. The document proposes to create jobs as part of the Year for Combatting Media Violence. Interdisciplinary working groups throughout the country; training sessions for students, faculty, and media professionals; and an award for good practices are some of the initiatives agreed upon.

The Argentine Federation of Lesbians, Gays, Bisexuals and Transgenders (FALGBT) reports today that it has signed a letter of intent with the Office of the Defender of the Public, in support for the “Year for Combatting Media Violence Towards Women and Gender Discrimination in Audiovisual Media.” The letter of intent was signed by the head of Office of the Defense of the Public, Broadcast Services Ombudswoman Cynthia Ottaviano, and FALGBT Vice President Claudia Castrosín. Buenos Aires City Legislator María Rachid also took part in the execution of the document.

The agreement aims to accomplish the following objectives:

• The promotion of equality between men and women, as well as pluralistic andnon-stereotypical treatment, preventing all forms of discrimination on the basis of gender or sexual orientation

• The enforcement of National Law 26.485, the Comprehensive Law on thePrevention, Punishment and Elimination of Violence against Women in their Interpersonal Relations

In an effort to meet these goals, the Office of the Defense of the Public and FALGBT will carry out the following actions:

• Disseminate information and assist in the convening of training sessions for university students, faculty, and media professionals, with the purpose of fostering education specifically designed to eradicate gender-based discrimination in audiovisual media

• Propose good communication practices with gender equity in radio and television, to be honored by the Office of the Defense of the Public