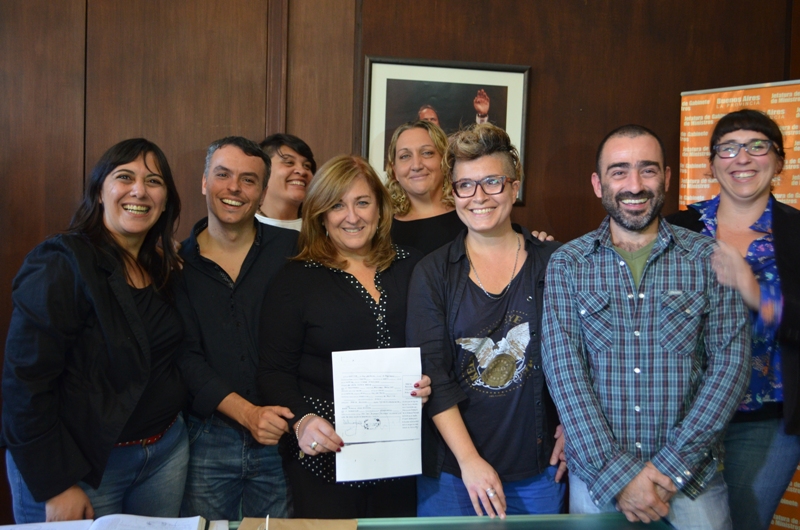 Through a memo, The National Registry in Argentina (RENAPER) notified the adaptation of children’s data collection forms to recognize triple parenthood. This comes after the resolution of Civil Registries of the Province and City of Buenos Aires who, under petitions of the FALGBT and
the LGBT Ombudsman’s Office, recognized triple parenthood/triple parentage of two children recently. Both entities drove changes to Article 588 of the New Civil Code to avoid restrictive interpretations of the regulation.

The Argentine Federation of Lesbians, gays, bisexuals and trans celebrates the recognition of triple parentage in the proceedings of the inscription of children, congratulating the authorities of the National Registry on collecting in administrative circuits, on the achievements conquered recently by the FALGBT and the LGBT Ombudsman.

It should be noted this past month of April, Antonio, son of Susana, Valeria and Hernán, born in Mar del Plata, obtained this recognition as a first in Latin America, in which without a doubt marked a before and after in the field of family law in our country and the region. And more recently the Civil Registry of Buenos Aires proceeded the same way to recognize triple parentage for young Furio.

It is now the National Registry (RENAPER) who has adapted it’s administrative procedures to the achievements FALGBT obtained recently, which has translated to the amendment of the prior wording of the fields MOTHER/FATHER, replacing them for PARENT 1/ PARENT 2/ PARENT 3.

In a memo published by the same organism it explains in detail:

“It is VERY IMPORTANT TO COMPLETE THE FIELDS IN ACCORDANCE TO THE QUANTITY OF PARENTS indicated in the birth certificate, without “skipping” fields. For clarification we will tell you that:

-If there was only one parent, the first field must be filled invariably (PARENT 1) and only this one: Parent 2 or Parent 3 must NOT be filled.

-If there were 2 parents, regardless of sex or order, the fields PARENT 1 AND PARENT 2 must be filled invariably, always leaving the PARENT 3 field blank.

It is also important to note that the Argentine LGBT Federation will drive the amendment of Article 588 of the Civil Code in the nation’s Senate that goes into effect the coming 1st of August. While in an integrated understanding of the approved text triple parentage is permitted, it was urgent to make progress with this amendment in order to avoid any possible administrative propositions implying potential obstacles, clearly unconstitutional, towards this type of parental recognition.

In this regard Esteban Paulón, FALGBT president, stated “We celebrate this new advance and congratulate RENAPER authorities for incorporating to administrative procedures  boys and girls’ inscription the possibility of triple parentage, which without doubts will consolidate achievements obtained recently by our team.  In addition we will drive for the amendment of Article 588 of the New Civil Code in Congress in order to expressly avoid the interposition of possible obstacles to the recognition of future triple parentages, obstacles which would be unconstitutional and unacceptable”.

In the same sense the LGBT Ombudswoman of Buenos Aires and FALGBT Secretary of Legal Affairs Dr. Flavia Massenzio added “It’s with enormous pride our achievements transform today into administrative proceedings that consolidate progress conquered previously. As we have been saying it’s always a joy to advance in recognition to the family reality of each girl and boy. This pursues and is guided by the guiding principle of the best interests of the child, an interest that under the constitution must be respected and implemented. The request for recognition of paternity in no way contradicts a previous affiliation, but on the contrary completes it.  It is not intended to displace the mothers who have already made the recognition, but in fact complete it, adding the recognition of the father.”