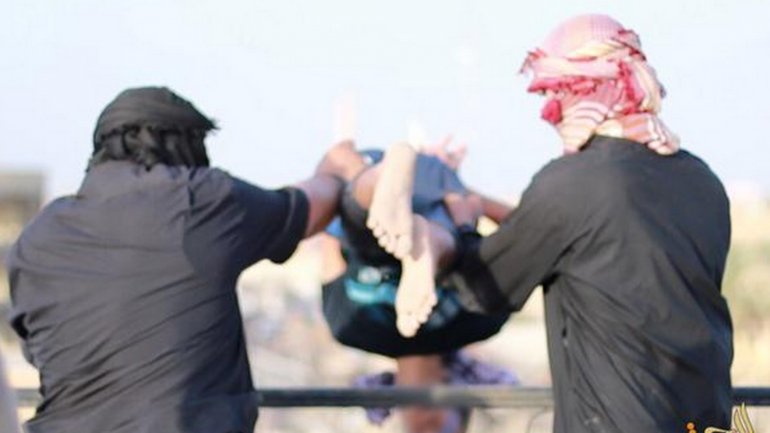 On this day, the Islamic State shared videos in which it throws 4 gay men to the void, convicted for their sexual orientation. From the Argentine Federation of lesbians, gays, bisexuals and trans, we demand an urgent action from the international community and would recall that at the present time in more than 70 countries expressing a sexual orientation or gender identity different to a heterosexual orientation, is penalized to different degrees. Even in 7 of those countries, it is penalized with death.

Those who make the Argentine Federation of lesbians, gays, bisexuals and trans express our astonishment at the videos shared today by the Islamic State (ISIS) in which it can be observed how they throw 4 males “sentenced” for their sexual orientation to the void, meanwhile below a mob attends to watch the punishment, in a public square. This aberrant act occurred in the Fallujah province of Ambar, in the areas of Iraq under their control.

To this the growing climate of violence towards lesbians, gays, bisexuals and trans that is recorded in more than 70 countries in the world must be taken into account (fundamentally from the Middle East, Africa, Eastern Europe and Asia) who penalize sexual diversity to different degrees. Even in 7 of them, the penalty reaches the death of the accused. All that demands a convincing reply from the international community to guarantee the liberty and integrity of our collective in the rest of the world.

On the subject, Esteban Paulón, President of the FALGBT said “We are enormously worried at the growing climate of violence towards lesbians, gays, bisexuals and trans in which is lived in numerous countries of the world, violence motivated in its greatest part by religious fundamentalism. The violent repression of the pride march in Turkey and other countries of Eastern Europe, and in a more extreme situation, the murder of 4 men for their sexual orientation by ISIS is compelling proof of that”

Additionally he added “We demand an urgent international action in favor of the liberty and integrity of our collective guaranteeing the validity of human rights and the free expression of the sexual orientation and gender identity of people in the entire world. Likewise we hope social and political leaders at a global level declare themselves clearly, and without ambiguities, against the violence and discrimination, which must be a collective compromise.”

To conclude he said “without any doubts in these moments which, in diverse countries of the world significant advances for our collective are recorded- the passing of Equal Marriage in Ireland, Mexico and the United States in only one month is proof of that- the most reactive sectors respond with compelling violence which we cannot permit or treat with indifference.”