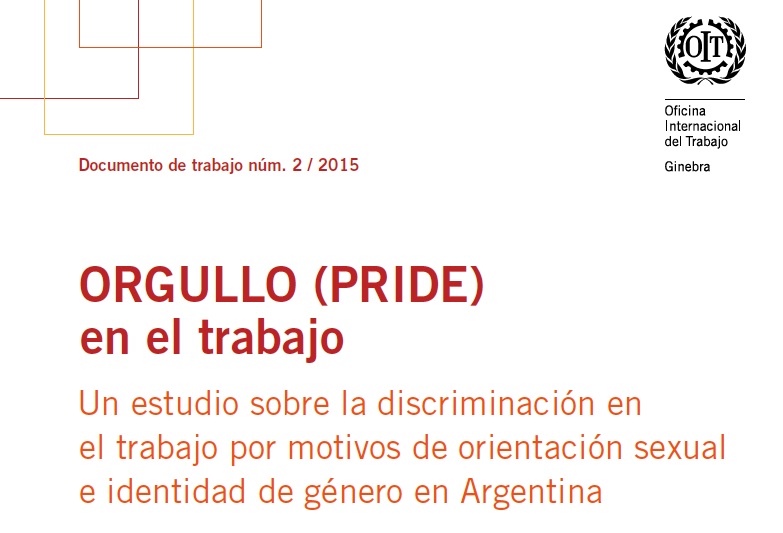 As part of the celebrations for 5 years of Equal Marriage law, the FALGBT will present together with the International Labor Organization (ILO) the report “Pride at work in Argentina” the first of it’s type at a global level. After the celebration of ten thousand weddings in all the country “Pride” proposes to recall the positive influence of the legislation, and explore outstanding subjects, especially for occupational insertion of the trans collective. The festivities will continue on Wednesday the 15th of July in the Argentinean National Senate, with national legislators, cultural personalities and icons of social organizations involved in the passing of the Equality law.

The Argentine Federation of lesbians, gays, bisexuals and trans invites everyone to partake in the Seminar of “Pride at work. A study on discrimination in employment motivated by sexual orientation or gender identity in Argentina” which will take place on Monday the 13th of July from 9 to 17hrs. in the Pestana Buenos Aires Hotel, located on Carlos Pellegrini 877.

Will participate in the Seminar the Minister of State for Labour, Employment and Social Security Sr. Carlos Tomada and ILO Argentina Director Dr. Pedro Américo Furtado de Oliveira, as well as leaders in diferent social, labor and human rights field.

‘Pride’ is the first report carried out at a global level to explore the reality of lesbians, gays, bisexuals and trans in relation to employment, and was developed by the Argentine LGBT Federation for the International Labour Organisation.

During the day various agents related to the world of work will elaborate on the achievements conquered in our country in recent years in relation to the incorporaton of the LGBT population, as well as the outstanding challenges in this area. All that through the participation of representatives from NGOs, of employers (male and female), universities, government exemplars, professional organizations, trade unions and international organisations.

In this regard Esteban Paulón, President of the FALGBT said: “After a job of more than one year in the whole country, it is a huge joy to be able to submit the Pride at work report, and greater is the pride of knowing that it is the first report of its kind at a global level and that will certainly serve as a guide to the work that organizations, agencies, professional organisations, trade unions, businesses and governments, carry out in various parts of the world in favor of equality and full engagement of lesbian, gay, bisexual and trans people in the world of work.”

He also added “after five years with the law on equal marriage, and three of the law of gender identity, there is much that has advanced. But also there are many challenges we must still confront to shrink the gap between legal equality and real equality. Faced with these challenges, coherently articulating joint action among the various sectors is vital to overcome situations of exclusion, especially with regard to the inclusion of the trans labour collective.”